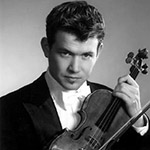 Benjamin Ziervogel, born on April 1983 in Klagenfurt, Austria, attended his first violin lesson at the age of six. In 1992, he was accepted to the Carinthian State Conservatory, to the class of Brian Finlayson who played a significant role in his development into a great violinist.

Since 2002 he is 1st violinist of one of today’s leading string quartets the Acies String Quartet, that in 2003 has been awarded 1st prize at the National competition of Austria in category of Chamber music/String Quartet, in 2006

1st prize at “Gradus ad Parnassum”, the Mozart prize and the “klassik.preis.österreich”. The members of the quartet were additionally chosen to be Artists of the Year 2007 by the Bank Austria Creditanstalt and by the Austrian Broadcasting Radio Network Ö1.

In 2008 the quartet won also the “Musica Juventutis” Competition in Vienna and in 2010 the Special Award and Audience Award at the Johannes Brahms Competition.

In 2012 Benjamin Ziervogel successfully completed four year studies with the Acies string quartet in the class of Prof. Günter Pichler (Alban Berg Quartett) at the International Institute of Chamber music in Madrid.

With Austrian label Gramola, as a member of the quartet, he recorded various string quartets written by Beethoven, Haydn, Debussy, Shostakovich, Gulda and Schubert. The recording of the Schubert-Quintet with the famous Cellist David Geringas received the “Pasticcio Prize” of the Austrian National Culture Radio Ö1 and the “Supersonic Award” by the cultural magazine Pizzicato, Luxemburg.

He has mastered his knowledge with internationally acclaimed artists as Igor Ozim, Benjamin Schmid, James Buswell and Joseph Kalichstein. Furthermore, he had the privilege to take lessons with the renowned violinist and pedagogue Isaac Stern and the pianist Leon Fleisher at the Encounters in Cologne and Jerusalem.

In years 2005-2008 he did his solo studies at the Bern University of the Arts, Switzerland, with world known violinist Benjamin Schmid.

In addition, besides string quartet he also appears in other chamber constellations: duo with an Armenian Jazz pianist Karen Asatrian, trio Slovenia with Slovenian pianist Rok Palčič and Andrej Žust, the Berlin Philharmonic’s horn player. Among others, he cooperated also with soloists of Vienna Philharmonics for the occasion of performance of the Schubert’s octet.

He plays a DOMINICUS MONTAGNANA violin made in 1727, an exceptional instrument generously loaned to him by the „Austrian National Bank“.